Friend? Enemy? Or Both? 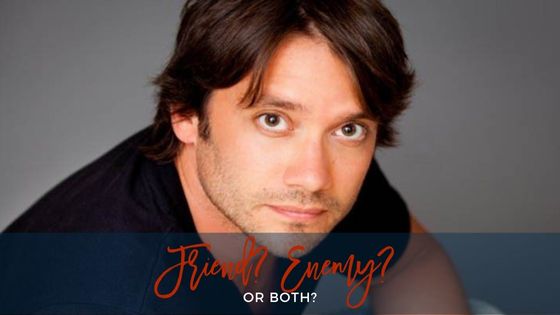 You’ve no doubt heard of the term frenemy.

Wikipedia defines a frenemy as “a person with whom one is friendly, despite a fundamental dislike or rivalry.”

This term can also describe a competitive friendship.

And this is exactly the dynamic we see between Stone and Jack (Jack being short for Giacomo Falconeri).

They met when Stone’s parents moved from Hell’s Kitchen to Bay Ridge in Brooklyn. They used to play kickball in the street together. They used to talk about becoming cops together.

They grew a little apart as they got older, but still, they linked up again when it was time to join the police academy. Jack made it through with no problems. But, as I hinted at in my previous email, Stone didn’t make it.

They were both disappointed at first, but Stone started to see this as a blessing in disguise. He began to notice more and more how differently he and Jack saw things. And so when Stone starts doing his own thing as a private investigator and Jack starts doing his thing as a beat cop for the NYPD, the two try to work together at first, but often found themselves in conflict.

And reconciliation often doesn’t work out the way they want it to.

Jack wants more than anything to be a good cop, to work hard, and to work his way through the ranks. He tends to see things as right or wrong with no gray area. He can be uncompromising and stubborn. It’s not that he’s close-minded per se; he can see and appreciate different viewpoints. He can put himself in others’ shoes and understand why they might think differently than he does. But at the end of the day, the law is the law. He keeps coming back to that and will not waver

By the time Cat Scratch Fever opens, Jack is already a homicide detective, having earned the title rather quickly. This should be a good thing for Stone, having a resource within the department.

But it seems frenemies can be unpredictable…

They try to bridge the gap sometimes, but each man is firm in what he wants to do, and so reconciliation often doesn’t work out the way they want it to. Jack wants peace at the end of the day but wants to do what he feels is right. He’s not super confrontational. He speaks in a neutral tone and orders his words carefully. He’s honest but not overly blunt.

Jack is pretty straight-laced. He has trouble considering things outside the lines he’s drawn for himself. He sees things in black and white. But he’s at heart a good guy, if unimaginative and dull.

At work, Jack is principled, respectable, and upright. He stands up for his beliefs even when it’s unpopular to do so. He treats people, even opponents, with respect and fairness. He’s transparent, acts without manipulation, and adheres to a code of ethics. Most of all, he’s loyal to his police community. He’s compliant, dutiful, and respects authority. He follows orders immediately. He’s a team player. And he encourages others to follow the rules. He often has trouble suspecting that those in charge are untrustworthy.

Jack doesn’t have very many friends, not even on the force. He’s known as a killjoy. He takes things too seriously, and doesn’t understand sarcasm, teasing, or double meanings. He acts properly and in control at all times and gets irritated when humor is injected into a serious conversation. He also gets agitated when people suggest he lightens up. His peers don’t find him fun to be around so he doesn’t often get invited to after-hours functions (no “beer with the boys” or anything like that).

I can’t wait for you. to see how this relationship plays out.